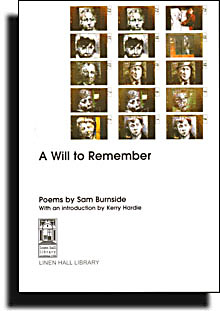 From, Introduction
‘Science and art have in common the practice of investigation…The personal is extruded from the formal statements of science … whereas in much art it is significantly present. Tentatively, Burnside moves his investigation away from the Holocaust itself and into the territory of his own experience of conflict, a conflict born out of ancient and insoluble opposition of Planter and Gael. At first he seems to be moving out of Szirtes’ ‘middle distance’ and – dangerously- into the present. But this apparent move is deceptive. Rooting his investigation largely in his own personal experiences as the descendent of Planters, he ventures to touch the present by opening his childhood like a box and staring into it. Painstakingly, he explores the paradox that is a human being, seeing the entrapment of both good and evil inside each of us as the factor most directly responsible for all holocausts, past and present. Rejecting the over-simplifications of ‘us’ and ‘them’ learned from TV gunfighters, the certainties of right and wrong learned from Gospel Tent, he yet despairs at the takers of the middle way, those human beings (most of us) who merely play the part handed to them, realising too late that in doing so they are conniving at evil, are cultivating ‘the caul /of ignorance of all those dark utterances / in alehouse and dancehall.’

Burnside has a disarming talent for seeing the world through the eyes of a child, yet recording these remembrances in unaffected adult language. His experiences are his experiences, yet he makes them accessible to his readers. He is at his purest (as is his poetry) in the natural world: ‘a blackbird lays down a song / each sharp note incised into the skin of silence’, yet he can acknowledge that the potential for destruction contained within our selves exists even in childhood, even in beauty.. Further, he can admit that empathy with the frailty of beauty does not protect us nor ensure empathy with the frailty of human beings. And he records the lure that is fear; he acknowledges with a poignant simplicity that that which is most to be feared lies inside our own hearts.
Kerry Hardie
Kilkenny
October 2002