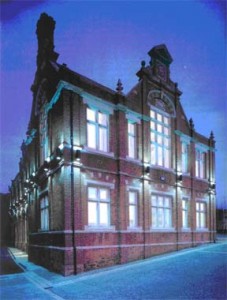 The Verbal Arts Centre was established by Sam Burnside in 1992: he acted as its first Director until 2003. A registered educational charity and a company limited by guarantee, the Centre’s object and principal activity was articulated as the promotion and support of spoken and written literature and the improvement of knowledge, understanding and practice across the verbal arts forms, together with research, provision and publication of information. The Centre was founded on a strong belief in the values surrounding access for all to imaginative experiences and reflected its founder’s belief in the democratic right of all to engage in, and to enjoy, creative expression.

As part of the dynamic development of the organisation a fine historic building was identified as a fitting home in 1996 and a vigorous fund-raising campaign initiated. The resulting building whose foundation stone was laid by John Montague, (first Ireland Chair of Poetry) on 5th December 1998 stands today on the city walls, symbol of a shared creativity in the city and the north west and on the island as a whole.

Photograph, courtesy of Perspective, The Journal of the Royal Society of Ulster Architects, Volume 8, Number 5, May/June 2000

The Royal Institute of the Architects of Ireland 2001 Regional Award

For me, the Verbal Arts Centre is identified as a public, civic and societal symbol of cultural continuity in a community sometimes touched by despair; the overall enterprise, I would suggest, may be viewed as a statement of hope and optimism for a future enriched by creativity, imaginative enterprise, expression and communication and by aesthetics and politics coming together in the exercise of choice and the pursuit of progress.
Sam Burnside

The Verbal Arts Centre is a monument to faith in the power of the language habit we all share. With its cornerstone from Drum Ceatt, its location in the old Presbyterian Primary School on the city’s walls and its ingeniously symbolic fittings, the Centre’s very architecture breathes the depth and diversity of cultures in the northwest of Ireland. Each side of the divided community in the city ¬ and the province and island beyond ¬ may have its own vocabulary of bitterness and belonging, but the project represented by the building and by the activities housed therein asserts that language can heal as well as hurt, unite as well as (or better than) divide. Here is an enterprise born out of the belief that humane, democratic, communally sensitive deployment of the verbal arts will reveal the truth of W.B. Yeats’s dictum that ‘words along are certain good’.
Patrick Crotty
Former Professor of Irish and Scottish Literary History, Academy for Irish Cultural Heritages, University of Ulster.

The founding of the Verbal Arts Centre represents the incarnation of a dream, an insight and a vision. Sam Burnside tells the story of a personal journey which led him along this particular path and in so doing opens up his mind and heart to those who listen. Running as an unbroken thread throughout the account is his deep love of poetry, prose and speech. For him language in all its forms is never considered as a mere vehicle of ideas, thoughts and feelings but as something significant in itself quite apart from what it is expected to convey. The Verbal Arts Centre is the outward and visible sign of what is inward and deep within the human spirit. It is also a sign of hope in a confused and often troubled world.
The Right Reverend Dr. James Mehaffey
former Bishop of Derry and Raphoe