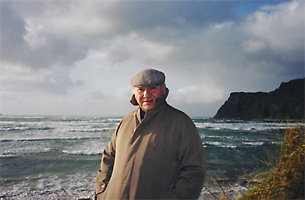 Sam Burnside was awarded an MBE (in 2012) for services to the arts.

Sam Burnside was born in Co Antrim and now lives and works in the city of Derry where he was founder and first Director of the Verbal Arts Centre, an educational charity he established in 1992 to promote literature in all its forms. He is the author of The Cathedral (1989) a long poem that won the Sunday Tribune/Hennessy Literary Award for Poetry in that year. His work has attracted a number of literary prizes, including an Allingham Poetry Prize ; the University of Ulster’s McCrea Literary Award for Literature and a Bass Ireland Award. His poetry has been published and broadcast widely. He has also published Walking the Marches(1990) and Horses (1993), a handmade book published in a limited edition by Ballagh Studios and with woodcuts by the Canadian artist Tim Stampton. He published Fahan Mura in 1995 (with an introduction by the Donegal poet Frank Harvey). He is represented in The Great Book of Ireland and in The Crazy Knot(1996), collaboration between Ulster writers and artists. He is the author of Writer to Writer (1990), a discussion of community-based writing initiatives; he has edited Ourselves and Others (1998) a gathering of children’s poems and The Glow Upon the Fringe (1994) a collection of essays that celebrate the literary heritage of the north-west of Ireland. In 2001 he devised an exhibition in celebration of the city of Derry ‘s contribution to literature and produced an accompanying publication The Magic Circle that includes an extensive bibliography of contemporary writers with Derry connections. He was guest editor of Issue 99 of the Honest Ulsterman. His long poem ‘The Grey Eye’ formed part of a collaboration with artist Leslie Nicholl and sculptor Colin Corkey and the resulting exhibition was mounted by the Orchard Gallery, Londonderry and the Old Museum Arts Centre, Belfast. Sam Burnside holds the degrees of BA, MPhil and PhD.

•  A long poem ‘Markings‘ appeared in The Recorder, the Journal of the American Irish Historical Society

Described by the Derry Journal as ‘one of the most important literary figures living in the north west’, his work has received praise for its craftsmanship (‘verse that is even-pitched and meticulously crafted’,Linenhall Review ) and for the ways in which it sympathetically explores the experience of living in Northern Ireland . The writer and critic, Professor David Craig has written ‘Sam Burnside is one of those Ulster poets whose pained and loving knowledge of their country issues in poems that bristle with down to earth experience, images of an almost physical insight, and the multiple voices of a people whose words are a living ingredient in his style’.

What they said about:

The heroes he iconises, the pride in industry and radicalism of his ancestors, the intimate celebration of daily life, are all purposefully rendered…
Books Ireland

A finely structured poem in the epic mould, spanning the whole experience of the Ulster Plantation, in which the writer tries to trace his personal history through the words and aspirations of his ancestors. A poem written out of one world of beliefs to another and opposed world of beliefs.
Sunday Tribune

Sam Burnside is an Ulster poet in the best sense, a worthy successor to John Hewitt, speaking with a different intelligence and tone but with the same breadth of wisdom, enthralled by the particularities and universalities of landscape, history and people. He uses a strong, blunt, vivid language, a stabbing language. He is a poet to read and savour.
Fortnight

Sam Burnside is already widely known for his powerful and compassionate writing. This book is more, then, than a remarkably confident accomplished debut: it is the extension of a high reputation … behind it is a guiding intelligence that marks itself out as possibly the truest heir among Irish writers of John Hewitt’s work.
Honest Ulsterman

A collection that covers such variable themes as belief, tragicomedy and elegies to individuals. The people, in fact, have their real presences in these pages with admirable assurance …the landscapes of this imaginative journey evoke some fine writing.
Acumen

It takes courage and faith in one’s own talents to write as firmly as Burnside does in the face of a form of writing sanctioned by Montague and Heaney, and others. Besides the gritty observations is a lament for lost promise and for failure to achieve a viable political, social, religious and cultural world.
Linenhall Review

Clearly he is emerging as a very important Northern writer.
Books Ireland

…walking the marches, or strolling the boundaries of land, can be a lethal as well as a recreational occupation in Ulster . Burnside strides back into pre-history via housing estates, farm yards, mansions, dance-halls, in poems that use the pain, unfussy speech his province is renowned for. His two meditative sequences, ‘The Grand Tour’ and ‘The Ulster Way’ are full of the possibilities of the past – the road to savagery need not have been taken… we can be sure that Radical Ulster is not …in the grave… as long as poets like Burnside give vent to their voice.
Books Ireland

Burnside writes vigorously about the Northern landscape, its savage beauties, its people, and the ubiquitous rumblings of its past. He is frequently described as ‘the truest heir’ to John Hewitt, and there is immediacy in his verse that is firmly planted in a wider observance, as in ‘Foyle’ where his description of trees along a riverbank indicts the failure of the land to sustain its people.
Dictionary of Irish Literature, Hogan, 1996