Sam Burnside’s first poem was published by James Simmons in the The Honest Ulsterman [i]  (1969). His New and Collected Poems was published on 1st January, 2013. In the intervening years he  has continued to write but has devoted much of his energy to the promotion of creativity through community and adult education and through  life-long learning.

His poetry is infused with a strong belief in the democracy of feelings and relies on an instinctive response to the human and natural world in which he lives. 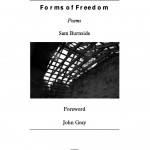 This is the latest collection of published poems, to be released on 14th November 2015.

The latest book of collected poems that was published through the old method of subscription publishing. The back of the book contains a list of all the people who helped to get the book published. It is available on Kindle and paperback.

This was a long poem first published in 1989. It explores the Cathedral and images of the Catherdral.

This was published in 198? and is a reflection on the movements during the marches in Northern Ireland. 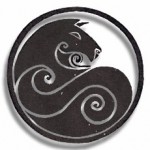 Written in 199?, it was a short run of hand made books with illustrations by the artist Tim Stampton.

This was published in The Recorder, an American journal, in 199? 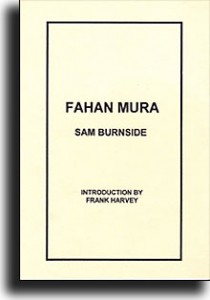 A short poetry book published about the village Fahan which sits of the banks of Lough Swilly, Rep. of Ireland. 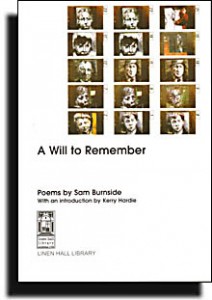 A Will to Remember

Written as a short book, the artist Leslie Nicholl illustrated the poems about the Holocaust. I was completed in 19?? and shown in Belfast. Now the images can been seen in the gallery of the Millenium Forum, Londonderry.

Written and published in 19??, the poems are accompanied by images from the artist, Leslie Nicholl.

References
[1] This magazine was published from May 1968 until Summer 2003 and so was one of the longest-lived and most widely-read magazines of its type in Ireland, and probably in the English-speaking world. Sam Burnside was guest editor of the Honest Ulsterman, Special Feature Issue: North By North West, Writing from Derry and the North-West of Ireland, HU, No. 99, Spring 1995